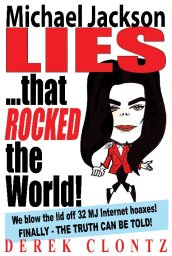 2. Download “Impotent Not – Electrifying Intimacy for People with Physical Challenges” here: Get My Copy of Derek Clontz’s book, “Michael Jackson Lies that Rocked the World” in just a few seconds.

3. Start reading! You now have access to wholesome, healthful intimacy advice to help you in the bedroom when physical challenges such as ED are causing problems for you.

Questions? Write to author Derek Clontz using the secure form below. He reads and answers every letter, often within minutes, always within one business day.

Can You Crack “The Clontz Code” in ‘Michael Jackson Lies that Rocked the World?’

Get it? No? Read Michael Jackson Lies that Rocked the World and you will.

Day after day more and more people are “getting the truth” in Derek Clontz’s “Michael Jackson Lies that Rocked the World” – as Marcia L. from Los Angeles put it in, “Oh my God – MICHAEL IS ALIVE! It’s all in the book. It’s all right there. Every clue. All the proof. I had to read it three times before suddenly it hit me like a ton of bricks. Now I know for sure. Michael IS still with us. He IS alive!”

Questions? Write to Derek Clontz or buy the book and read it. Take it to your logic professor or anyone who understands “prose code.”

“The truth has been told,” says Derek. “But only if you have eyes to see it and ears to hear it.”

Are Elvis and Michael alive?

Millions of fans believe they are.

And now, Derekclontz.com has located six experts who offer up a compelling body of evidence to support their belief that the King of Pop and the King of Rock might, just might, still be with us.

One source even gives what she believes will be the true dates of their deaths, which, she says, are well off into the future. Her reasoning and documentation will astound you.

And don’t let anyone tell you what you will read in this report isn’t true. No one is claiming that Michael and Elvis are alive. But all of our experts are saying there’s a good chance that Michael, 55, and Elvis, 78, ARE alive. They make their case. They give you the evidence.

On Aug 12, when we publish our report, you will decide. 100 pages of documentation will blow  you away.

Don’t be the last person you know to read  “Michael Jackson Lies that Rocked the World” and find the secret clues that prove MJ faked his death and is still alive.

A staggering 100,000 people worldwide already know what you don’t.

The “King of Pop” has a plan, and the truth is out there for any fan who can “think outside the fish bowl” and read “between the lines.”

Remember, in the realm of Michael Jackson, what’s up is down and what’s down is up. What’s then is now, what’s now is then. The truth is what you believe. And what  you believe is true.

Repeat, do NOT be the last person you know to read Derek Clontz’s explosive book. The truth is in there. Every word of it.

Free for one day!

Wow – an impressive 4,222 fans from 27 countries around the world took advantage of our “Michael Jackson Free Book Day” on July 15. The giveaway was our way of saying “thank you” for sales of 50,000 copies of “Michael Jackson Lies that Rocked the World’ in just the first three weeks it’s been available internationally at Amazon.com.

You can still buy the book, of course, by clicking “I want the Michael book now!” It’s $2.99 for a limited time only, so hurry to take advantage before the price goes up. We are committed to contributing all profits above and beyond publication and distribution costs to charities that we believe Michael would have appreciated and supported himself .  In the interest of transparency, we’ll list them when we make our quarterly distributions in October.

Making money off the memory of Michael Jackson? Not a chance.

Holy smoke and yes, yes, yes! We’re giving away free Michael Jackson books for one day only to commemorate 50,000 copies sold worldwide! Get ready to order. And do tell your friends. It’s our way of saying, “We appreciate you” – here are the details:

2. All you have to do to get your free copy is visit http://www.amazon.com/Michael-Jackson-Rocked-World-ebook/dp/B00DOAGLHE/ref=sr_1_1?ie=UTF8&qid=1373827764&sr=8-1&keywords=derek+clontz+michael+jackson

4. No matter where in the world you live, you can convert YOUR time to Pacific Daylight Time with the automatic conversion tool you’ll find here: http://www.onlineconversion.com/timezone.php

6. Questions? Ask using the contact form at the end of this page.

While you’re here, vote in our “Is Michael Alive?” Poll. So far, 93,000 people have weighed in, with a staggering 97 percent saying, “Yes! MJ Faked His Death. He’s Alive!” Click and vote now: https://michaeljacksonlies.wordpress.com/michael-is-alive-poll/

And, don’t forget to check out Derek Clontz’s latest book for men and women who are faced with physical challenges in their relationship: Impotent Not, Electrifying Intimacies With Physical Challenges, Our Experts Tell You How. For men and the women who love them .

“That’s a big number, a stunning majority – and a testament to the power of Michael’s appeal,” says Derek Clontz, author of the riveting new book, “Michael Jackson Lies that Rocked the World“.

“We’ll keep the poll running indefinitely. It will be interesting to see if the percentages will wiggle and waggle or stay put. A near-identical poll we published at derekclontz.com from June 25, 2009 through June 1, 2013 gave us a different result, with 50.1 percent of fans saying Michael is dead and 49.9 percent saying, ‘Wrong, wrong, wrong! He’s alive!'”

You can vote in the poll, comment and chart the numbers as the votes continue to roll in at: “Michael is Alive Poll”

Russian president tells derekclontz.com to stop talking about his 2012 meeting with Michael Jackson

A spokesman for Russian President Vladimir Putin’s office has warned derekclontz.com in an official letter to stop publishing “any account of President Putin’s meeting with Michael Jackson on Nov. 18, 19, 20 and 21, 2012 until a complete statement on Jackson’s performances in Moscow is released through official channels.”

The suggestion that Jackson is alive, visited Putin three years after his alleged “drug-induced death of a heart attack” and now is planning to perform at least two concerts in Moscow as part of a comeback tour is difficult to deny.

The spokeswoman identified herself as press deputy Katrina Kolakov, and contacted our offices via a courier-delivered diplomatic pouch sent from Washington, D.C. The courier did not speak English and, according to the secretary who accepted the package, “wasn’t friendly and he was wearing a shoulder holster.”

“The story stands,” said Derek Clontz, publisher of derekclontz.com. “Clearly, we’ve hit a sensitive nerve. But Mr. Putin, for whom I have the deepest respect, ought to be forthcoming with details. Millions of fans want to know what’s going on.

“My sources in Russia are gathering the facts. If Mr. Putin doesn’t tell us what’s happening, my team and I will. Of course, maybe the most authoritative spokesman of all will step forward, that being Michael himself, of course.”

DerekClontz.com has learned that Pravda has deep-sixed “a now confirmed report” that Michael Jackson was, in fact, alive and did, in fact, visit Moscow on Nov. 18, 19, 20 and 21, 2012, three years after his reported “death” of a drug-induced heart attack. Both government and newspaper sources say the report was blocked by no less a figure than Russian President Alexandr Putin, who was photographed with Jackson during the visit. More as this story develops.

Russia’s iconic “Pravda” newspaper has postponed publication of a story that was supposed to appear in today’s editions that says Michael Jackson was alive and visited Moscow as late as Nov. 17, 2012, three years after he is alleged to have died from a drug-induced heart attack. “Pravda”, translated into English, means “truth.”

A spokesman for the publication contacted by telephone played the postponement close to the vest, saying only that “one of our sources failed a lie detector test” regarding the date of Jackson’s alleged visit. That source maintains the accuracy of his statement, however, and is scheduled to be tested again on Tuesday, the spokesman said.

Newspaper staff members who requested anonymity said the “thrust of the story” –  that Jackson was in Moscow after his purported death on June 25, 2009 – “is not in question.”

“Only the date of his visit is at issue,” said an editor who has worked directly on the report. A senior editorial assistant added: “There is a photograph that shows Michael Jackson standing beside (Russia’s President) Alexandr Putin who is holding up a newspaper dated Nov. 6, 2012.

“Photographic experts are trying to determine if the picture has been altered. I think we’ll know something this week.”

More on this story as it develops.

Michael Jackson death-hoax shocker – finally, 4 years after his disappearance, the truth can be told

Michael Jackson Dead – or Alive? Finally, the truth as only Derek Clontz can tell it.

I want the book. Take me to Amazon now.

Blockbuster new book from “Michael Jackson is Alive” mastermind Derek Clontz blows the lid off 32 “King of Pop” hoaxes that flamboozled millions of fans. What’s true? What’s not? Is Michael alive? Is he dead and, if so, where is he buried? Who is Cassandra Gretchen-Sims? What did Jackson’s sensational “Death Hoax Diary” really reveal?

No holds barred. Illustrated. A must-read for all fans.

On June 25, 2009, just minutes after I heard it credibly reported that Michael Jackson was dead I fabricated and posted a story online at derekclontz.com claiming just the opposite, that the pop warbler had faked his death and gone into hiding.

And so begins the definitive book that only Derek Clontz could write, a riveting read that will explore the most compelling Michael Jackson reporting of our times with chapters like “Michael Death-Hoax Diary Found” … “New Details of Michael Death Hoax Revealed” … and, of course, “Dramatic New Proof – Michael Jackson is Alive.”

Up-to-the-minute polls. Fresh commentary. New illustrations. The truth as only Derek Clontz can tell it.

On sale at Amazon and all major outlets just days from now.

Super-Fan Alert: We have a limited number of early copies available at a special price, $2.99. Hurry. This offer will end. Click to buy now at Amazon.